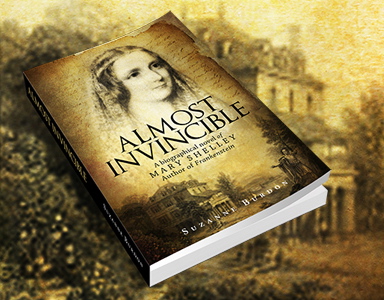 Suzanne Burdon talks about her book Almost Invincible a biographical novel about Mary Shelley. The book whilst factually based, beautifully imagines the emotions, conversations, and some of the mysteries surrounding Mary Shelley’s life.

Mary Shelly began Frankenstein in a thunderstorm in 1814, when she was eighteen. By then she had been living for two years in a scandalous relationship with the poet Percy Shelley, who was already married with two children.

During the nine turbulent years Mary and Shelley were together, Claire, Mary’s step-sister was the ever-present third, whose manipulative behaviour often drove Mary to despair.

Her writing became her grip on sanity and Shelley never wavered from his belief in her creative genius – as she believed in him.